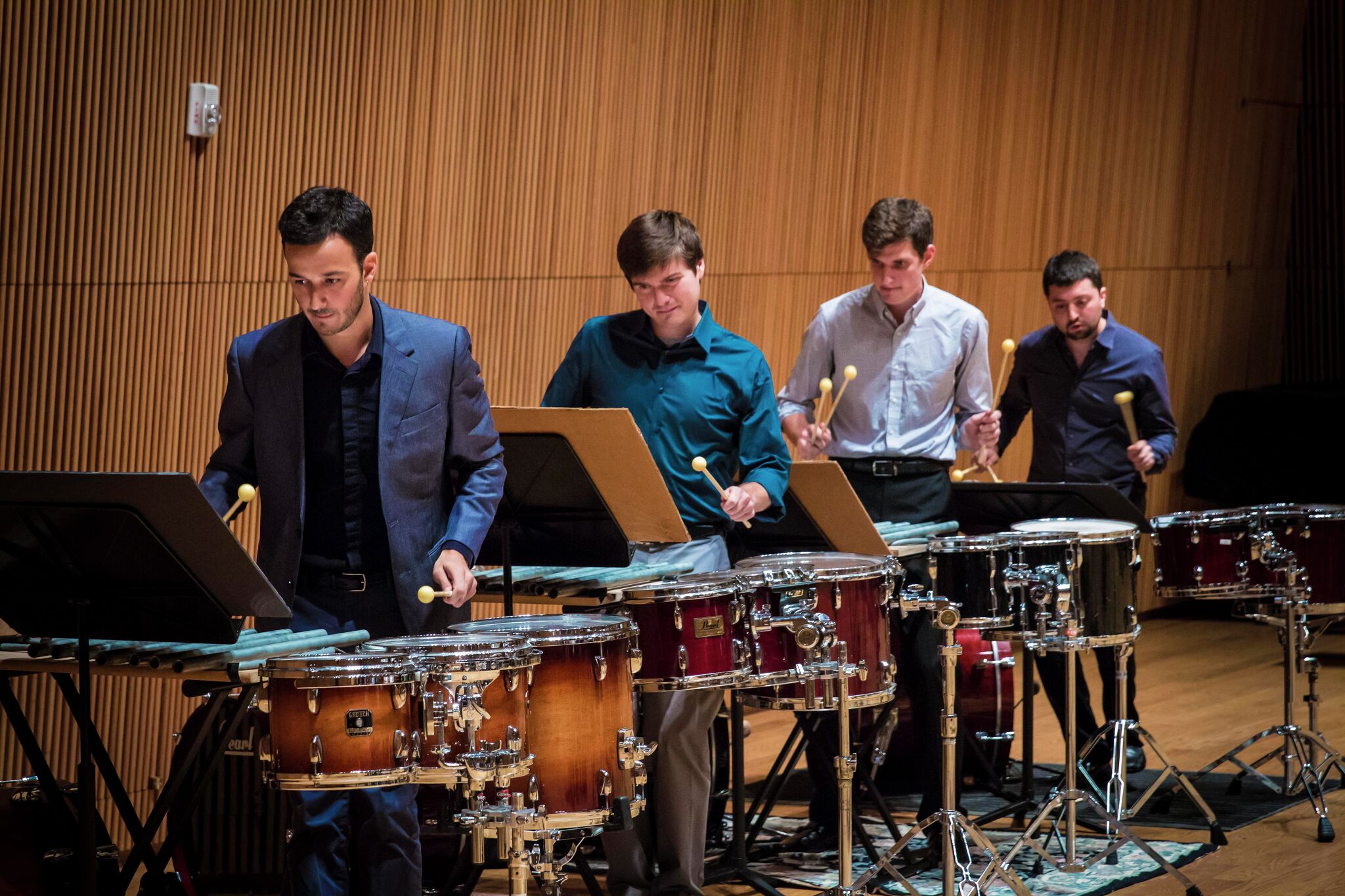 Dedicated and intrepid music lovers were kept busy this past weekend with the Albany Symphony’s American Music Festival, which took place Thursday through Sunday at venues across Troy and Cohoes. The headline event was Saturday night at the Troy Savings Bank Music Hall, which I’ve reviewed before. I also attended three other concerts and here are some observations in reverse chronological order.

On Saturday afternoon, Sandbox Percussion performed Andy Akiho’s “Seven Pillars,” a haunting 80-minute work performed at the AI ​​Center of Excellence, a former Masonic Lodge located at 19 Third St. in downtown Troy. The majority of the square footage of the high-ceilinged space on the third floor became the stage for the four drummers. They performed the entire room from memory at instrument stations that were periodically repositioned around the room.

Occasionally, during their solos, individual members were seen hitting mallet keyboards (marimbas and vibraphones, primarily) that were simultaneously being rolled through space by the other players. It’s the same quartet that debuted Viet Cuong’s “Re(new)al” with the Dogs of Desire at the 2017 festival. With its clever choreography, this piece showed that Sandbox members know how to do the trick and play at the same time.

“Seven Pillars” also included a lighting scheme by Michael Joseph McQuilken that players flagged with simple computer commands. As the audience took their seats, the back of the stage was lined with seven vertical white lights that looked like fluorescent tubes. During the performance, these free-standing units, each about 4 feet tall, changed colors and were regularly repositioned amid the instruments to redefine the space or highlight individual players. At times, the lights pulsed with the music, at one point even taking on a strobe effect that gave a particularly fast-paced section a cinematic aura. Well past halfway through the procedure, some of the lights were placed horizontally, which created a whole new perspective. Sculptor Dan Flavin’s mind seemed to smile.

Besides the space and the decor, the music was engaging and repetitive but still full of offbeat accents and unexpected twists. The thrilling performance was clean and precise, both subtle and brave. We couldn’t help but laugh and applaud a few times as, in between beats, a performer threw their sticks in the air and caught them in a split second before continuing with the fast score.

In earlier times, percussive music typically involved a dumping of odd props and formless passages of improvisation. Steve Reich’s orderly minimalism erased all of that. Although it does not appear minimalist, Akiho’s eleven-movement work, which lasted eight years, follows in the long wake of Reich. The piece was a finalist for the last Pulitzer Prize for Music and the recording received two Grammy nominations.

On Friday night at Cohoes Music Hall, the Dogs of Desire made their annual appearance with five new works. Have I ever used the terms “mutts” or “mongrels” before covering this group? Most of these newborn puppies had some redeeming quality, but several quickly exhausted their welcome.

Musical director David Alan Miller, usually so positive, twice used the word “long” to introduce some of the tracks. This proved to be both a warning to the public and a complaint to composers. He also said, not for the first time, “Composers never listen to me.”

Each of the new Dogs pieces will receive a second performance at one of the ASO’s upcoming outdoor concerts in six cities through July 3, a series dubbed TrailBlaze NY, celebrating the Empire State’s 750 miles Trail. Each composer was invited to draw inspiration from one of these sites. By tying new music tightly to regional history, Miller continues an ASO tradition that began over 20 years ago with what has become known as Capital Heritage Concerts. First came new works inspired by and performed in front of prominent Tiffany windows in Troy. Then it was an afternoon of new works at a museum, a temple, and a government building in Albany. The Saratoga Battlefield, the interiors of the State Capitol, and the art of the Empire State Plaza were the focus of subsequent years.

Maybe Miller needs to go back to smaller subjects, maybe something like street corners or door fronts. When you give to young composers looking for themes like an entire city, or the Hudson River, or the Empire State Trail, it should come as no surprise that they reach for the stars and deliver oversized pieces.

For her “Biking to Amsterdam, NY – Summer, 2022”, Natalie Draper invited writer Anita Sanchez to contribute a poetic text which was read, at length, as an introduction to each of the piece’s five movements. The writing explained all the vivid things that flabby music should have given us on its own, like the feeling of fresh air and sunshine, the strain of pedaling a bicycle, and the noise of the railroad. Additionally, too many historical facts have been incorporated, making the words and music feel like the soundtrack of a tourist video rather than a stand-alone concert.

“In Search of Standard Time” by Bobby Ge was based on an observation that the Schenectady railroad industry gave rise to the notion of time zones and the schedules that now govern our lives. He sought to frame his piece (another in five movements) with the pre-industrial laissez-faire towards time and the casual relaxation of being on a hiking trail. In between would come the grids and restrictions of modern life. If only the music was up to snuff. The writing was thick and busy and full of activity, but nothing really seemed to happen except that it took a long time.

For “Empire Lines” by Loren Loiacono, only two of the three movements were executed. His concept was to depict landmarks along the Hudson seen while driving Amtrak from New York. Loiacono is not a rookie with the ASO. His writing is always engaging and there was no shortage of good material here, just too much for the occasion. It was also a kind of concerto for Sandbox Percussion and they announced themselves with heavy anvil rhythms. The broad-shouldered music framed attractive, lightly scored folksong fragments throughout.

Andre Myers, another returning composer, struck the perfect balance between form and substance in “The New Colossus,” a setting of Emma Lazarus’ sonnet dedicated to the Statue of Liberty. In his program note, Myers shared his thoughts on the current state of immigration and how the Empire State Trail metaphorically stretches far beyond state lines. The music carried these concerns lightly. Singers Lucy Fitz Gibbon and Ruston Ropac, who were otherwise underutilized during the program, sang a direct setting of the text accompanied by orchestration reminiscent of cool jazz. A characteristic passage during a generous interlude brought together muted trumpet and brushes on the snare drum.

The evening ended with Jack Ferer’s suite of arrangements of five light rock songs which were written and sung by Katie Hammon of Troy-based band Bear Grass. Hammon’s material is thoughtful and enjoyable and she has a beautiful voice. Maybe someone thought it would add a touch of pop culture to the evening, but after all that happened, it felt like an unimaginative coda. Speaking of pop music, does anyone else remember the days when Dogs gigs mostly consisted of short, tongue-in-cheek, punchy numbers?

The American Music Festival kicked off Thursday night at Troy Music Hall with a recital by pianist Gloria Cheng, who was in town to premiere John Williams on Saturday night. Cheng is an established talent with a devotion to contemporary works. Yet on this occasion, she failed to deliver a performance that had a sense of progression or offered any clear distinctions. Everything sounded the same. That’s quite a feat considering the many musical styles and languages ​​she’s navigated.

Cheng showed only a soft, fleeting connection with the audience. She whispered lessons on the pieces and assumed the patrons were knowledgeable insiders of the contemporary music world. She also asked us to help her keep track of what she had played by putting check marks in our programs, never realizing that we were sitting in the dark and unable to read anything.

There were pieces by 11 composers and one of them, David Lang’s “Summer Piano” was a world premiere. Lang’s soft, tonal cycles (a triple barrel, Cheng told us afterwards) matched his soft sensibility perfectly. The music was reminiscent of ambient electronic music composer/producer Brian Eno.

Another highlight of the tender voice were the four miniatures by four different composers who wrote in memory of the late Steven Stucky. Played without pause, they were respectful, nostalgic and evocative.

Joseph Dalton is a freelance writer based in Troy.