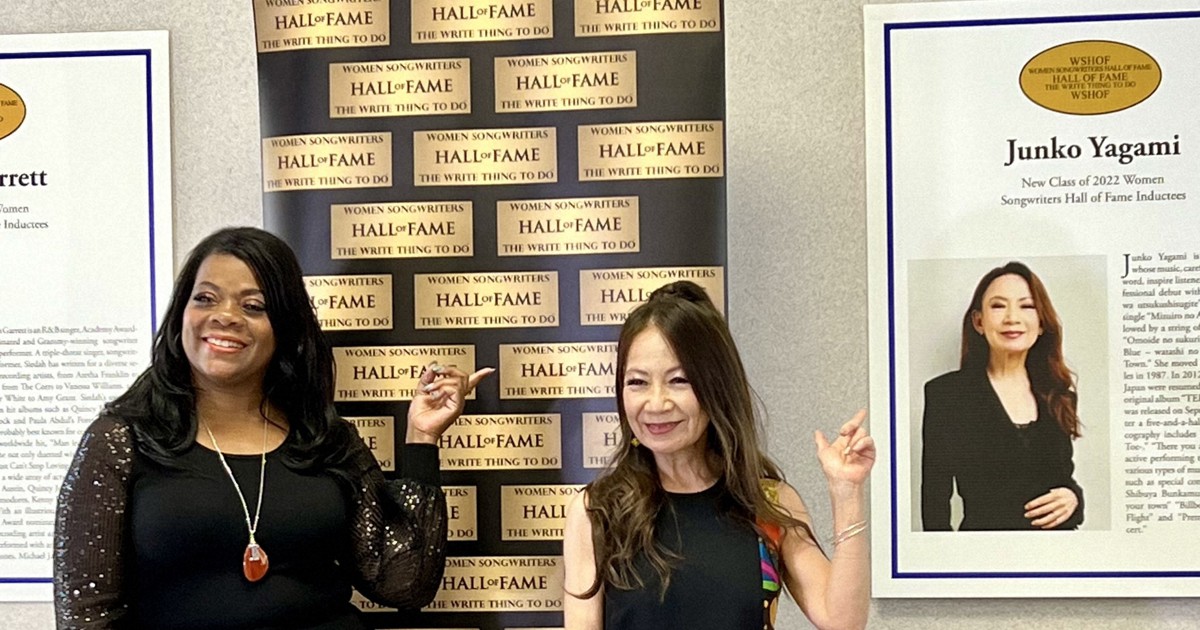 Japanese singer-songwriter Junko Yagami, who recorded a string of pop hits after her debut at age 20, has been active in the United States for over 30 years. Below, she reflects on an award she recently received from an American music organization.

I was the first Japanese woman to be inducted into the “Women Songwriters Hall of Fame”, which is selected by the music organization of the same name based in Washington, D.C.

This group was founded in 2021 to support female musicians, and although this is only the second year that a woman has been elected to its hall of fame, I have been inducted alongside big-name artists like Roberta Flack last year and Gloria Estefan and Jody Watley this year. I am so happy.

But, like all my readers, I said to myself: “Why me?” I wanted to ask the reason, but since I have a concert in Miyazaki Prefecture on August 28, the day of the scheduled award ceremony, I couldn’t attend. So I contacted the rep for the organization, Janice DeLoatch, and she told me that if I could come to Washington, DC, she could give me the price in advance.

I immediately arranged a flight to Washington, DC When I arrived, Janice welcomed me with open arms. At the museum where the award ceremony took place, costumes, instruments and memorabilia of the previous year’s winners were on display. I also donated two albums and a costume I wore to a concert in the United States, made from a kimono.

I received my certificate and glass trophy at my own private awards ceremony, and Janice and I moved into another room. I couldn’t leave without knowing why the award was given to me, so that I could continue to sing for the rest of my life. Janice told me that this year they decided to choose a female songwriter from Asia, but I was not among the three finalists. ” What ? So why ? I was even more puzzled.

Then Janice smiled a little and began the following surprising story: One of the members of the selection committee is Lasse Lehtonen, a professor at the University of Helsinki in Finland, who studies Japanese music. The teacher saw your concert in Tokyo in 2018 and recommended it to me, saying that your unique voice, lyrics and songs make you an artist who transcends borders and generations.

The selection committee members then listened to my music and watched a video of my recent concert. Janice explained to me that the teacher was right and that I was like a “ball of fire” on stage, and everyone agreed to choose me.

It was America that taught me to live my life with my own identity and the importance of diversity. Since my return (on the music scene) in 2011, I decided to create and sing songs that only I can do, without chasing trends. I did my best to bring the best of this day to the stage, whether there were many or few people in the audience. I never thought it would lead to a prize. I was more than happy to know that my current song and stage performance was appreciated, not my old hit songs such as “Mizuiro no Ame” or the 80’s “city pop” music that is popular again in the United States.

I always said I would sing for the rest of my life. I never meant to say it halfway, but this award made me even more confident that “I have no choice but to do this, and that I can do this”.

Junko Yagami is a singer-songwriter born in Nagoya, Aichi Prefecture, central Japan. Yagami made her professional singing debut on her 20th birthday with a piece titled “Omoide wa Utsukushisugite” (Memories Are Too Beautiful). She has many hit songs including “Mizuiro no Ame” (Sky blue rain). She moved to the United States in 1986 and resumed her stage career in Japan in 2011.

Noah Cyrus and Ben Gibbard remember that “every beginning ends”