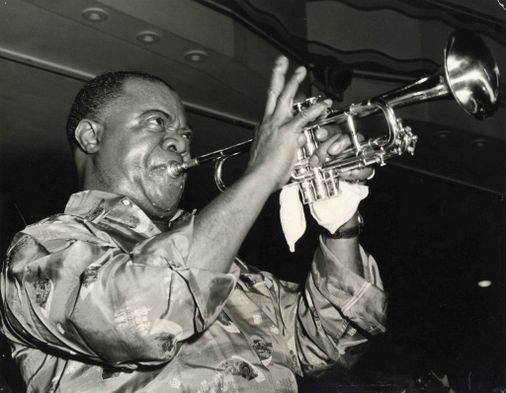 There are numerous clips in the film of Armstrong being interviewed, as well as of him appearing in films and in news reports and performances. And that’s not counting dozens and dozens of period photographs. The archival research here is quite prodigious. This helps to make the documentary always lively and informative, as well as comprehensive. This is also one of the reasons why “Louis Armstrong’s Black & Blues” is often surprising. Who knew that James Baldwin, after listening to Armstrong perform “The Star-Spangled Banner,” told a friend that it was the first time he enjoyed hearing the national anthem?

But back to Welles. Jenkins starts with him because, bang, that’s it: a juxtaposition of the two most influential figures in 20th-century American culture. Ernest Hemingway said that “all modern American literature stems from a book by Mark Twain called ‘Huckleberry Finn’.” You could say, perhaps even more accurately, that modern American film begins with “Citizen Kane” and all (yes, all) modern popular music, and not just in America, begins with “West End Blues”.

“Kane” you probably know. As for Armstrong’s time 1928 recording, it did not create jazz. But he effectively created jazz as we know it, from the bugle call of Armstrong’s opening trumpet cadenza to his extended scat solo. In those 3 minutes and 21 seconds there is a sense of freedom, boldness and liberation that underlies later jazz, yes, but also blues, R&B, rock ‘n’ roll, soul, rap, hip-hop – and, really, popular culture generally in the age of mass media. Armstrong didn’t just light the fuse. He was the fuse.

It’s no surprise you don’t see or hear Armstrong of such importance. Several things explain why it is no longer considered revolutionary at all. The first is that the revolution he helped start has been so successful that it obscures its success. It doesn’t even seem like an achievement now. Another is that Armstrong has become such a dominant figure. A distance greater than that of four decades separates “Hello Dolly!” and “What a wonderful World” of “West End Blues”. The year he won a Grammy for his recording of “Hello, Dolly!”, 1965, the revolution was taking place elsewhere: “Rubber Soul”, “Highway 61 Revisited”, “Supreme Love” were all released.

More importantly, there was the issue of race. The transformation of American culture to which Armstrong had notably contributed made him seem like a throwback, even a reactionary figure, with his stage manner, that ubiquitous handkerchief, and, as actor Ossie Davis once said, a smile with “more teeth than a piano has keys. Davis didn’t mean that as a compliment.

Early in the documentary, Wynton Marsalis recalls that as a young man growing up in Armstrong’s native New Orleans, he thought of him as a sort of Uncle Tom. Soon Marsalis saw otherwise, he says, coming to realize that Armstrong’s phenomenal musicality went hand in hand with no less phenomenal strength of character. An example of the latter was his very public outrage, extending to a denunciation of Dwight Eisenhower, over the abuse of black Arkansas students entering Central High School in Little Rock.

Jenkins confronts the complexity of Armstrong and race with another juxtaposition. The first musical number heard in the documentary is Armstrong’s singing “(What did I do to be like this) Black and blue.” He recorded it in 1929, although the version heard here dates from a few decades later. It will take 35 years for mainstream popular music to offer such a moving or profound confrontation of racism, that of Sam Cooke. “A change is coming.” If the way Armstrong sings “my only sin is in my skin” doesn’t break your heart, you don’t have a heart to break.

Jenkins follows this with Armstrong singing “I’ll be happy when you’re dead, you rascal,” from a 1932 musical short. Armstrong and his band are dressed in “native” costumes, such as leopard skins, and the lyrics actually mention fried chicken. It’s terribly awful. Still, close your eyes and listen to how gloriously Armstrong sings through the beat, how volcanically he scates, and the breakneck speed of the entire performance. Your jaw drops again, and for very different reasons. Even locked in the trappings of racism in its most blatant form, Armstrong escapes them through his sheer artistry and what Marsalis, flirting with understatement, calls “transcendent joy.”

Jenkins gave the documentary a largely chronological but mostly thematic structure. The move creates a good flow. The film flows neatly without ever feeling hectic or rushed.

There is no voiceover. We hear from a very wide range of talking heads: many musicians, many critics, two of Armstrong’s wives. Except there are no heads, only voices. Jenkins lets us hear the speakers without showing them. A fairly simple decision is doubly clever. This means that the visual focus remains on Armstrong; and the archival interviews exist for us on the same level as those carried out for the documentary. It gives a sense of contemporaneity to each of them. Jelly Roll Morton died in 1941. Marsalis is very present among us. Yet each man’s ideas present themselves with a similar freshness and sense of relevance. The effect is to underscore how vivid Armstrong’s music remains and how relevant his example is.

Armstrong is a documentary filmmaker’s dream. Not only was he such a charismatic camera presence, but he left behind a treasure trove of scrapbooks and reel-to-reel tapes. In a rare misstep, Jenkins animates a few pages of the first. On the tapes, Armstrong shared his thoughts on everything from music to marijuana (he most certainly inhaled). He was also a natural writer, and rapper Nas reads Armstrong’s letters and diaries.

There are many wonderful moments in the documentary. Leave one for the rest. We hear Armstrong describe the time he and his wife had an audience with Pope Paul VI. “Do you have children?” asked the pontiff. “No, dad, but we are still crying. Imagine having to translate that into Italian, let alone Latin.

BLACK AND BLUE BY LOUIS ARMSTRONG

Directed by Sacha Jenkins. Streaming on Apple TV+. 106 minutes. R (language – Armstrong could be flippant and unbuttoned in his use of obscenity – so what? any young person interested in watching should be encouraged to do so).

Mark Feeney can be contacted at [email protected]