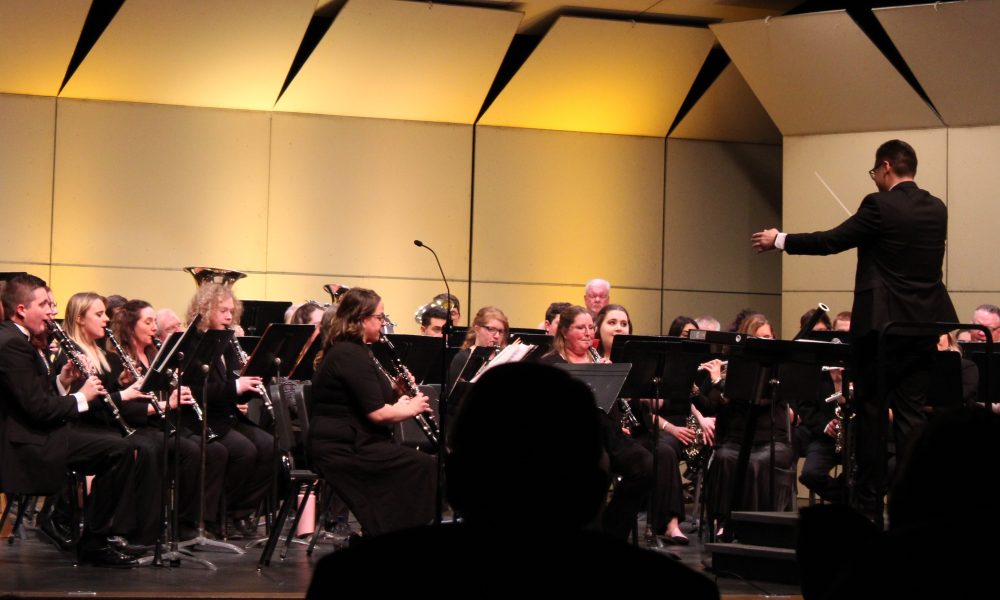 Undeterred by a windy Wednesday night, locals headed to the Schuler Performing Arts Center, to catch a more soulful tune of sorts: the NIC Wind Symphony performing “Echoes of Americana.”

Almost two-thirds full, the hall resonated with a particular musical quality. There were no violins. Instead, audiences listened to wind instruments, percussion and piano perform six pieces, all American compositions.

The ensemble included students, faculty, staff, and members of the NIC community, such as Elisabeth Tarsio, a Sandpoint clarinetist.

Aleczander Hamilton, an NIC student, was one of nine trumpeters. He is also a member of the NIC Jazz Ensemble and the Cardinal Pep Band.

“One of the reasons I went back to school was that during COVID I wasn’t playing much – I came to get back into it,” Hamilton said.

The compositions were related to the history, geography, folklore and cultural heritage of the United States, some of which were well-known melodies, such as “Shenandoah”.

(Listen to an excerpt from Wind Symphony’s rendition of Edwin Franko Goldman’s “The Chimes of Liberty” below.)

Former NIC student Renei Yarrow sang soprano for “Requiem for a Soldier”, one of the most striking pieces. It was composed by his teacher, Gerard Mathes, who worked at NIC in the music program for 32 years until his retirement in 2020.

This performance was Yarrows’ first time with the Wind Symphony and she felt it was her chance to give back to Mathes.

Mathes wrote “Requiem for a Soldier” 18 years ago to express a soldier’s experience during World War II and the US Constitution. His uncle’s personal experience also inspired the work.

“It’s a horrible experience,” Mathes said. “The relentless sensitivity of having to face danger but also remembering the home and people you left behind.”

He said that although it has been played many times over the years, the new group of people add an emotional quality to it.

Conductor Bryan Hannaford is in his fifth year as Director of Orchestras and Associate Professor at North Idaho College. In addition to conducting the NIC Wind Symphony, he also conducts the NIC Jazz Ensemble, the Cardinal Pep Band and the Cardinal Chamber Orchestra.

Chuck and Claudette Rose were delighted to attend the concert. Claudette is a pianist and church organist.

“It’s just wonderful that in Idaho we can listen to free music,” they said. “Shows from people who live here, giving back to the community.”

Native American music, dance and crafts in the spotlight at the Chasco Fiesta