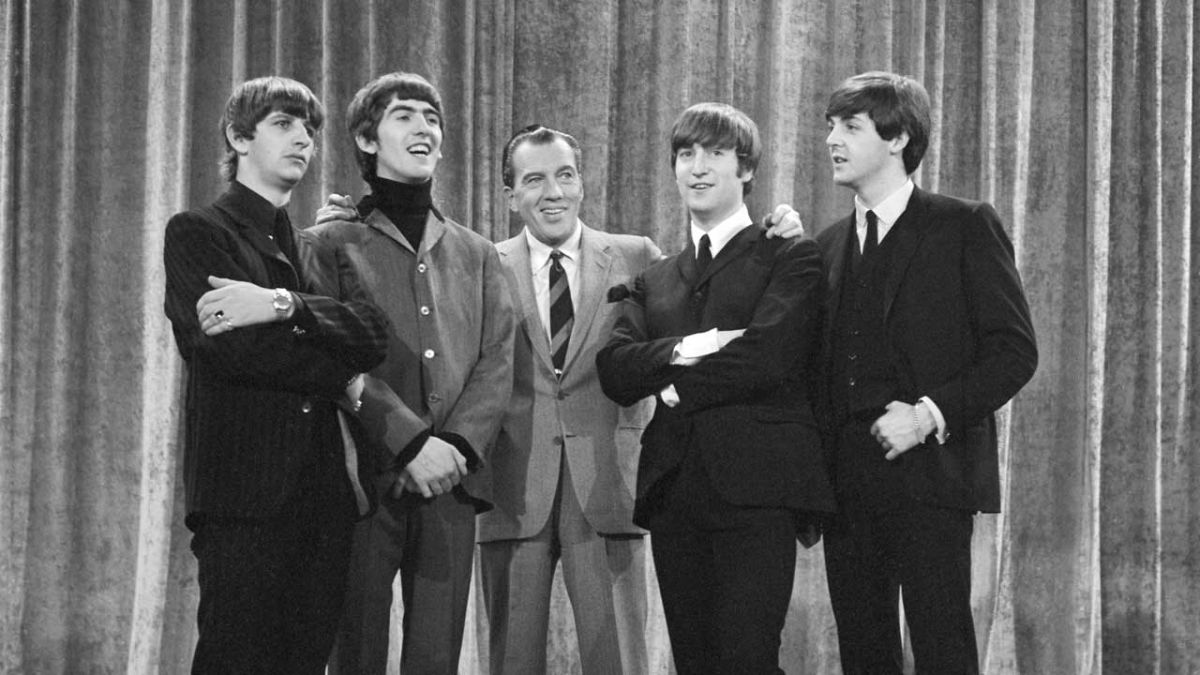 On February 9, 1964, the Beatles took to the stage at CBS Studio 50 in New York to open an episode of The Ed Sullivan Show.

Accompanied by deafening cries, the band made their US television debut, watched by a record 73 million households, or about 40% of the US population. The band opened and closed the hour-long show with five songs: All my love, until there’s you and She loves You during their first set, and I saw her standing there and I want to hold your hand during the second.

Newsweek reviewed the performance in less than glowing terms. “Visually they are a nightmare: tight, dandy, Edwardian/beatnik suits and big bowls of hair pudding,” they wrote. “Musically, it’s a near-disaster: guitars and drums slam a merciless rhythm that suppresses secondary rhythms, harmony and melody.

“Their lyrics (punctuated by nutty cries of ‘yeah, yeah, yeah!’) are a catastrophe, a nonsensical farrago of romantic Valentine’s Day sentiments. Chances are they’ll fade away, like most of adults confidently predict it.”

They did not fade. American viewers were able to see what Newsweek could not, and were transfixed. A generation of budding rock stars was born instantly.

Tom Small: “Most magic is a trick, an illusion. But it was real. Man oh man, was it real. I think the whole world was watching that night. It certainly was – you knew it, sitting in your living room, that everything around you was changing. It was like going from black and white to color. Truly.”

Dee Snider“I was eight years old when this [I Want To Hold Your Hand] came out, and after hearing it on the radio, and then seeing that legendary Ed Sullivan performance, that was it, I wanted to be a Beatle. I soon realized that I couldn’t really be a Beatle, but I could be a rock star, and that plan never changed.”

Kevin Cronin (REO Speedwagon)“I was a little too young to understand what Elvis was. My babysitters liked him, not me. Don’t get me wrong, I appreciate why he’s considered iconic, but that doesn’t bother me. never moved forward. But one Sunday night at home, in front of the family’s black-and-white television, when The Ed Sullivan Show was on, and I saw the Beatles. It changed my attitude. I then knew what I wanted to do with my life. Seeing them clicked in my soul.

Steve Morse (deep purple)“The appearance of the Beatles in Ed Sullivan coincided with the purchase of a small battery-powered tape recorder for Christmas. I was 10 years old and experimenting with the recorder, and so when the Beatles came on the show, I thought, ‘This is music. I will record it. I listened to it and realized how much I loved it.

“My friend got the album, which was pretty amazing considering you had to raise a few dollars to buy it. Albums were expensive back then, especially for little kids. So my friend was as the kingpin of the neighborhood because he had met the Beatles.

“We would go to his house after school and listen to the record. It was awesome – the music just blew us away.

Gene Simmons (kiss)“There’s no way I’m doing what I’m doing now if it wasn’t for the Beatles. I was watching The Ed Sullivan Show and I saw them. These skinny, kinda androgynous little boys with long hair like girls It blew me away that these four boys [from] the middle of nowhere could make this music.”

Joe Perry (Aerosmith)“Seeing them on TV felt like a national holiday. Talk about an event. I’ve never seen such cool guys. I had heard some of their songs on the radio before, but I was unprepared for how powerful and utterly spellbinding they were to watch. It completely changed me.

Steve Lukather: “When the Beatles were on Ed Sullivan, life went from black and white to color like in ‘The Wizard of Oz’ – and the irony that I am in the Toto band is not lost on me.”

Nancy Wilson (heart): “The Beatles are the reason I picked up a guitar. I was nine when I saw them on The Ed Sullivan Show [on February 9, 1964] and it was like being struck by lightning. Instead of wanting to marry a Beatle, I wanted to be a Beatles.”

Earl Slick: “I was too young to be bitten by the Elvis virus, but when the Beatles came on TV, it really struck a chord. Screaming girls, cool clothes, weird haircuts, all that Within a few months, I had my first guitar.”

Walter trout: “I was 13 and saw the Beatles on TV. I saw them on the Ed Sullivan show. I went to school the next day and nothing was the same. The world has changed. I decided I had to buy an electric guitar and try it out to start playing music with other people.”

Rick Nielsen: “They completely changed the music, especially in America. They changed me too. Until then, I was a drummer. But I became a big fan. I had the single of please make me happy a year before anyone in the United States had even heard of The Beatles.”

Richie Sambora“One of my earliest memories was of sitting cross-legged on the floor in the living room of the house where I grew up and watching black and white television and watching the Beatles on The Ed Sullivan Show. I was 5 years old and I remember thinking, ‘Wow! That’s what I want to do.'”

Chrissie Hynde (The Petenders)“I remember exactly where I was sitting. It was amazing. It was like the axis had shifted.”

Bruce Springsteen: “It was different, it changed the lay of the land. Four guys, playing and singing, writing their own material. Rock ‘n’ roll came to my house where there seemed to be no way out, and opened up everything a world of possibilities.”

Doug Clifford (Creedence Clearwater Revival): “They were a quartet and we said, wow, we can do it. If these guys from England can come out and play rock ‘n’ roll, we can do it.”

Greg Kihn“If you were a shy 14-year-old kid who already had a guitar, this was a life-changing event. In a single weekend, everything had changed. I came home from school the previous Friday looking like at Dion. I went back to class on Monday morning with my hair dry and brushed forward. That’s how it went quickly.

Elliott Easton (Cars): I was 10 years old when the Beatles played on the Ed Sullivan Show and I already played a little guitar. To have this guy standing sideways looking down at his guitar as he played his licks like that, to my impressionable mind, it set the definition of a lead guitar in stone. I knew right away that was what I wanted to do with my life.”

Scott Gorham: “The Beatles were the first experience that made me want to get into music. I was maybe twelve when Ed Sullivan introduced them on that legendary show, and I couldn’t get close enough my face from TV. These guys changed everything.”

Kentucky Headhunters“When the Beatles came and played Ed Sullivan’s TV show in 1964, it froze him…you only work two hours a day and the girls are screaming and chasing you…come on!”

Marky Ramone“I was only twelve when I first saw them on the Ed Sullivan Show. I was playing with my toys, and when I walked into the living room, they were there on TV. They were very lively, especially Ringo, and He was the guy who inspired me to play drums. He wasn’t very good technically, but he was extremely tight and he put me on the path to becoming a drummer. They have were the first band to write their own music, really. I was very impressed with the Beatles.”

Stanley Clark: “I remember the Beatles came on the Ed Sullivan Show and I didn’t like anything my sister liked so I pretended not to like her, even though it was instinctively!”

Steven Van Zandt“The day before, there were literally no bands in America. The next day everyone had a band.