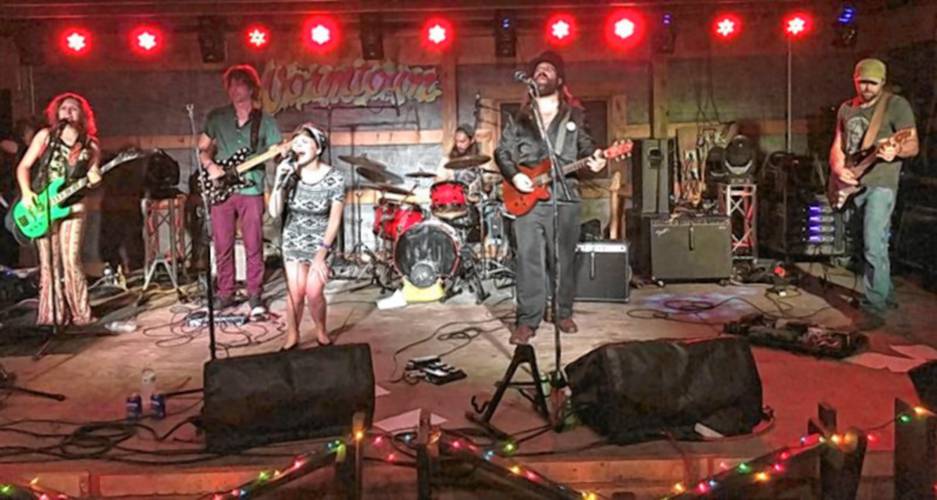 The Recorder – Sounds Local: Rice – an American band that will debut at The Stone Church

The members of Rice – an American band have spent the winter locked in their basement studio honing their tunes and – coincidentally, like Punxsutawney Phil – they will rise above ground on Saturday.

I don’t expect this eight-piece band from Warwick to make any predictions about how long the winter will be, but what the band will do is make their stage debut at The Stone Church, 210 Main. St. in Brattleboro, Vermont. in the recently renovated hall with a show at 7:30 p.m. The opening will be Nate Martel from Outer Stylie.

Rice – an American Band is a collaboration of various musicians from Pioneer Valley that grew out of a jam session at a party in the summer of 2014. Among those jamming were guitarist Brian DiMartino and Phil Simon. After that Simon and DiMartino continued to collaborate and before they knew it they were a real band performing at clubs and festivals in the area.

The group, led by Simon, currently includes Kyle Heon on drums; Lauryn Winiarski on bass; Steve Benson on pedal steel, mandolin and vocals; and Courtney Parker and Emily Jones on vocals. Joshua Leach and DiMartino both play guitar. And it’s not uncommon for special guests to take the stage at a Rice show.

At their core, Rice is a rock band, but one that includes elements of country, folk, and more jam-heavy music, much of which is written by Simon. Other members of the band got involved in songwriting and the band is also known for their covers, ranging from Pink Floyd to The Cranberries.

Simon has a long history in the music business, not so much as a musician, but working behind the scenes. He is the owner of Orange-based Simon Says Booking, which provides booking and advertising services to an extensive roster of musicians including The Skatalites, Max Creek and Freekbass.

He started the agency in the 1990s, while living in Oregon. He moved to the East Coast in 2000, working as a reservation agent in Boston, then relaunched Simon Says Booking in western Massachusetts. In addition to all the work he does for Simon Says, Simon hosts the Old 78 Fall Farm Festival in Warwick every year.

However, prior to Rice’s training, Simon had limited experience playing in bands.

â€œI had a group from 1996 to 98 or so in Oregon, where a lot of this material came from,â€ he wrote in an email exchange. â€œI also attended a few groups here and there. But this band is by far my biggest personal musical project to date. My first group was called Freaks of Nature and we lived up to that name.

Once he moved to Massachusetts, guitar and songs were put aside while he devoted his time working as a reservation agent. It wasn’t until he started playing with rice that playing music also became an important part of his life.

â€œRice – an American band is also a reflection, to me, of everything that makes up my life,â€ Simon said. “I hope the other members of the group feel the same and I think that here we are finally maturing and that each member of the group takes ownership of the group and their own role in it.”

The members of Rice said they hope their audiences will walk away from their shows with a good idea of â€‹â€‹the strengths and talents of each member of the group. It’s a pretty talented group, some of whom play with Llama Lasagne, Rodd Cummings and the Vibrators, the Chad Hollister Band and more.

â€œWe settled down, not to comfort each other, but for a real feeling of admiration and love for each other, and a willingness to get the most out of this music,â€ added Simon. “This is the first time in my life that I have felt this real cohesion in a group, that everyone takes it seriously, not in the pursuit of fame or fortune, but out of devotion to a goal. artistic, to make this music sound good, but almost as important, to make it feel good.

Rice are a high-energy live band who form a strong bond with their audiences, so expect a lot of dancing at The Stone Church’s show.

â€œWe are very happy to be playing Brattleboro for the first time,â€ added Simon. â€œAlthough we’ve performed in Vermont, this is our first visit to Brattleboro and our first gig for 2019. We couldn’t be more excited.â€

Remember, it’s Winter Carnival Weekend in Greenfield, which means there is plenty of activity in town, including music. On Friday night, the Hawks & Reed Performing Arts Center, 289 Main Street in Greenfield, will kick off a weekend of events starting with a winter ball featuring the band TapRoots.

TapRoots, led by Matthew King of Amherst, is a 12-piece band with established musicians who play a dancing mix of Afro-Cuban rhythms, reggae, soul, jazz, hip-hop, samba, and rock. Their lyrics touch on hot topics like environmental issues and the Black Lives Matter movement as they celebrate coming together as a diverse community to have a great time.

This show will feature two new members of the group: Latin master percussionist Yahuba Garcia-Torres and King’s daughter, Zami BK, who will perform. Other guests include rappers Catalyst and Force (from The Alchemystics). Wurliday, a soul funk band from Albany, NY, will open the show.

The celebration continues on Saturday with the Winter Carnival Jamboree at 4 p.m. Presented by Under the Tree Arts, the Jamboree is a chance for children up to 8 years old to immerse themselves in an hour of art and music. The celebration will end Saturday night at 8 p.m. with a midwinter reggae night that will feature music from local artists Green Island like Dave Noonan, Rebelle, Rhythm Incorporated and I-Ganic Sound System.

Sheryl Hunter is a musical composer who lives in Easthampton. His work has been published in various regional and national magazines. You can contact her at [email protected]