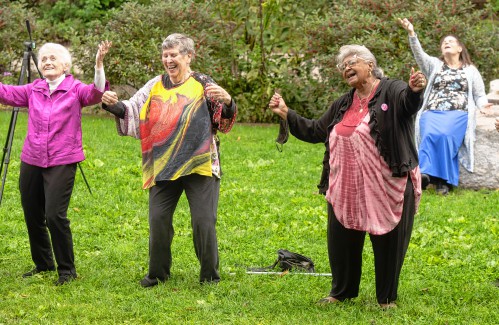 After spending months rehearsing remotely and hosting pre-recorded online shows in 2020 and the first half of this year, the Young Choir @ Heart had high hopes of returning to the show this fall. The elderly singers resumed in-person rehearsals in July, and things were going well – until a little glitch called the delta variant popped up in August.

So Y @ H, originally slated to perform this month at the Northampton Music Academy, had to revert to Zoom-based rehearsals – but the band also documented their up-and-down journey of the past few months with a new online show, “Waiting!” which will be screened on Saturday October 30 at 7:30 p.m.

Longtime Y @ H director Bob Cilman calls new production a ‘COVID documentary musical’, given how singers’ talk about COVID [which] leads them to sing songsâ€¦ like a musical. Filmed in several locations around the city, including Look and Pulaski Parks and the Northampton Community Arts Trust, the show features Y @ H performing songs by Johnny Cash, Cream, The Eurythmics, Steve Winwood, Cake, The Pogues and more.

This is the group’s latest progression in their online shows, Cilman notes, as Y @ H has tried to push past the limits of Zoom boxes. In April, for example, they held a â€œfilm concertâ€ in which individual members sang songs accompanied by videos filmed around their homes or other locations.

The Saturday show is free but is also a fundraiser for Y @ H; the goal is to raise $ 30,000. Visit youngatheartchorus.com to register for the show and make a contribution.

Larry Campbell and Teresa Williams, Hawks & Reed Performing Arts Center, Greenfield, Nov. 6, 7 p.m. – You might call them a powerful couple, though Larry Campbell and Teresa Williams would surely resist that label. But this veteran husband-and-wife team has created an impressive musical CV playing alone, as part of the late Levi Helm’s band, and for other artists including Bob Dylan, Emmylou Harris and Jorma Kaukonen.

Campbell, a multi-instrumentalist best known for his guitar work, and Williams, a singer / guitarist / actor, released two acclaimed duet albums between 2015 and 2017 that embrace folk, gospel, blues and country rock. The songs from their most recent album, “It Was the Music”, are from an episode of 10 movie of the same name that follows their travels across the country playing music.

Their rich sound is also built around close harmonies and a deep understanding of American roots music. Writing about the couple’s second album, “Contraband Love,” the American songwriter said Campbell and Williams had “harnessed the dark spirit of America in all its forms … and created a unique sound inspired by the past that is fiery, moving and timeless. “

Not to mention the bond the two share in performing together, after years spent in which they often performed in separate concerts. As Campbell told The Gazette in a 2016 interview, â€œCouples who work together can be a recipe for disaster. We saw it happen. But we found such focus with these songs, and after all the time we’ve been apart, it’s so greatâ€¦ to be on stage together.

The mourners Jenny, Calvin Theater, Northampton, November 10, 8 p.m. – It’s been almost 20 years since Canadian singer-songwriters Nicky Mehta, Ruth Moody and Cara Luft performed at a Winnipeg guitar store and the owner suggested to tour together under the name The Je pleure Jennys. The three did just that, cut an EP, then Mehta and Moody brought in New York singer and bassist Heather Masse when Luft left the band after a few years.

Since then, the Jennys, along with a few other supporting musicians, have toured North America, Europe and Australia, released several acclaimed albums and won praise for a folk-roots sound based on closely related harmonies, original songs and unique arrangements of works by other artists. . Masse, Mehta and Moody all continued their solo work – Masse trained as a jazz singer at the New England Conservatory of Music in Boston and released a few jazz records – but their band’s sound has turns heads, not just their vocals but their mix of banjo, acoustic guitar and double bass.

As NPR once wrote of a show they performed at Newport Folk Fest, â€œThe Wailin ‘Jennys are more than just crisp bluegrass harmonizers; they are also wonderful conductors who give their traditional music a feeling of true reverence. Their harmonies are truly unreal – it’s a real surprise to learn that the band members are unrelated.

In a career dating back to the mid-1960s, Pierre Loup could be best known for his stint as lead singer of the J. Geils Band and for hits like “Freeze Frame” and “Love Stinks”. But since the mid-1980s Wolf has had a successful solo career – Rolling Stone calls his 2002 album, “Sleepless,” one of the 500 best records of all time – in which he has performed as a duet with Mick Jagger, Keith Richards, Aretha Franklin and many more famous names.

He comes with his band, the Midnight Travelers, to the Northampton Academy of Music on October 30 at 8 p.m.

Luthier’s Co-op in Easthampton will ring the night before Halloween – and celebrate its 13th birthday – on October 30 with a costume party and the funk, full-bodied sounds of Skokazoba and The Quaboag atmosphere. The show takes place from 7 p.m. to 11 p.m.

Also on October 30, the Orrin Evans Trio – Orrin Evans on piano, Matthew Parrish on bass, and Byron Landham on drums – showcases Evans’ diverse work, whose music embraces jazz, neo-soul, country and hip-hop. The show is at the Springfield Community Music School at 7:30 p.m.

From neo-psychedelic rock to country, folk, pop and blues, singer-songwriter Chuck Prophet has created an eclectic body of work, with some of the best song titles, such as “Jesus was a Social Drinker” and “Love Doesn’t Come from a Barrel of a Gun”. He appears with his group, The Mission Express, at Gateway City Arts in Holyoke on November 3 at 8 p.m.

Slide guitar specialist Sonny landreth, known as “the king of Slydeco” for his unique neck technique and Zydeco influences, plays Gateway on November 7th at 8pm

Singer-songwriter Lucy Wainwright Roche grew up in family music and drama: his father is Loudon Wainwright III, his mother is Suzzy Roche (of The Roches) and his half-siblings are Rufus and Martha Wainwright.

Wainwright Roche put all that baggage to the good work, using a strong voice, tongue-in-cheek lyrics and a funny sense of humor to forge his own musical path. She is playing Hawks & Reed in Greenfield on November 12 at 7 p.m.

Steve Pfarrer can be reached at [email protected]